Argentina’s national horseback game handed down to every generation of gauchos, the Latin cowboys reigning on the Pampa, with respect towards and magnificence of Argentina’s cultural wealth.

In Argentina, a gaucho means both the horseman and his mount. The gauchos are not only Argentina’s emblems, but they are first and foremost vital to make the pampa alive. Equestrian sports have been very popular among them since this population took over the last centuries. A very famous equestrian activity, called the Pato game, has been on the rise of popularity over the last decades. Every Argentinian will say: “Nada es mas argentino que el Pato” (“nothing is more Argentinian than the Pato game”).

In the area around San Antonio de Areco, this sport is widespread, providing us with the unique opportunity to tell you its rich story.

Where does the Pato come from?

The Pato appeared at the beginning of the 17th century. It was first considered as a basic horseback game between gauchos. However, it has today become a well-known leisure activity. Besides, it is considered the ultimate national sport.

Originally, the Pato game was a meeting between two teams fighting for a leather ball in which was put a living pato (duck). The aim was to reach a defined point with this ball in the opposite camp -located approximately 1,5 miles away from the picking up point on the field, without letting the possibility for the opposition to take up the ball. This impressive sport, often saved for the more daring ones, achieved great success among gauchos coming from the whole country despite the brutality, sometimes mortal of some matches.

At the dawn of the 19th century, religious and civil authorities owing to its high degree of risks forbade the Pato game. The sport gradually disappeared from Argentinian customs.

It is only in the middle of the 30’s that some rules were established in order to minimize the risks of accident. Ethics and respect towards horses were the fundamentals of these new regulations. The Pato game became Argentina’s national sport in 1953.

What are the game’s rules?

During a match, two teams of four players compete against each other. The aim is to score as many goals as possible in the opposite camp, thanks to a leather ball thrown in a high up one meter-large bucket located at the end of each field. The game takes place on a field, also known as campo, as large but longer than a soccer pitch. A game lasts between 30 and 50 minutes. The players must be respectful towards the rules, because of the harsh violence and danger animals and gauchos might face. One basic rule for example consists in stretching your arm when holding the ball.

The Pato game was invented by the Argentinians for sure, however, many countries have drawn inspiration from this typical sport, such as Europe. You are more likely to have the word Horseball in mind. Indeed, more and more countries got interested in this modern discipline, especially France, when Captain Clave, a French traveler in South America and spectator of several matches in the early 30’s, decided to pass down the sport to Europeans. Although the rules were adapted to local requirements, the two games remain very similar.

The “Pato Indoor game”, as he used to call his invention, was every day more and more spread over France. Over time, both games have been merging. The true Horseball appeared a bit later with its own rules (smaller field, ball looking like a soccer ball provided with handles). The Horseball game, as the Pato game does, still has similar principles, and both sports are today demanding an accurate technique.

Just as the Horseball game got inspired by the Pato game, Afghans took inspiration from Argentina and created the Bouzkachi game, a horseback game aiming to score goals with a goat carcass, sometimes at the expense of player’s safety.

The Pato game, today deeply rooted in the Argentinian culture thanks to its irreproachable sportsmanship and its strong respect towards south-American customs, keeps boosting its popularity at the four corners of the world. Many countries such as North Africa, Canada, the United-States, Middle-East, and many others followed the trend and adopted the Horseball-Pato game in their customs. Yet, few people are aware of its very first origin, that is to say, a traditional leisure activity performed by Argentinian cowboys. 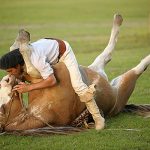 The first Gauchos of Argentina
?>