Gauchito Gil, the Saint of the poor

Gauchito Gil is an emblematic, popular and legendary character, deeply embedded in the Argentine identity.

He is the subject of worship and devotion throughout the country, usually manifested in shrines placed along the roads which are easily identifiable by their predominant red color.

According to legend, Gauchito Gil was called Antonio Mamerto Gil Núñez, a gaucho from the town of Pay Ubre, in the province of Corrientes in northern Argentina. Different stories circulate about him but none is beyond dispute. The most widely spread story is set in the middle of the 19th century, and started when a romance sparked between Gil, then working the campo, and Estrella Díaz de Miraflores, a wealthy widow from his hometown.  The young woman’s brothers didn’t appreciate this liaison with a lowly peasant, and neither did the local chief of police, who was madly in love with Estrella. Having become a target for the literal embodiment of justice, Gil had no choice but to flee and enlist as a soldier in the Triple Alliance War (1864-1870) between the Alliance formed by Argentina, Brazil and Uruguay against Paraguay. On his return, he was called to fight alongside the Autonomist Party of Corrientes in the civil war against the Liberal Party opposition. But Gauchito Gil was categorical in his response: he would not fight in that war. This firm stance led to his persecution and subsequent capture in January 1878 by the Military.

A national icon is born: the Death of Gauchito Gil

Gauchito Gil was charged as a deserter and condemned to death, hung by his foot from a carob tree 8 km from his hometown, his throat slit. Before his execution, Gil told his executioner that his son was seriously ill and told him to pray for him in Gil’s name. The executioner followed Gil’s instructions and his son was healed. Days later, the executioner returned to the scene of the hanging to give Gil’s body a proper burial.

The news of the miracle spread rapidly through the towns and provinces of the country: the myth of Gauchito Gil was born!

A shrine was built near his tomb and receives, to date, dozens of pilgrims daily who come to pray to Gauchito Gil, asking for prosperity, work, love or success.

Every January 8th (the date of his death), thousands of visitors gather at the shrine to remember Gauchito Gil. Offerings are placed at the foot of the statues, t-shirts, tattoos and flags are sold with his effigy. His grave is never dark on January 8th, illuminated by hundreds of different sized candles. There is even a website where you can email your prayers to be later printed and deposited at the foot of the grave.

Although originally opposed to this belief, the Catholic Church in Argentina eventually accepted the legendary figure of the gaucho, and he is now recognized as a Saint. Masses and tributes are regularly organized in his honor in Argentina, but also in other countries within South America.

If you’ve been to Argentina, you might have noticed those little red altars lining the roads outside villages all over the country. They are actually shrines built in honor of Gauchito Gil. Surrounded by flags, ribbons and red sails, they are easy to spot. Inside there is usually a statue of the gaucho or images representing him. Travelers stop to offer wine, cigarettes, flowers or other objects to greet the memory of the hero. Drivers honk twice when they are approaching one of these shrines, asking for protection on their journey.

Many say that it represents the color of the Autonomist Party, to which Antonio Mamerto Gil Núñez belonged, as opposed to the blue of the Liberal Party. Others prefer to say that red recalls the blood of the Saint during his death.

Some people will also tell you that Gauchito Gil was, for a long time, leader of a group of thugs who stole from the rich, making him a Robin Hood of sorts for Argentina. He is now one of the most emblematic and popular figures of the country.

This myth, perpetuated by oral transmission, continues to prompt passion and adoration. 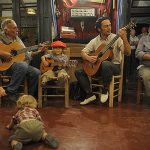 Where do Gauchos meet for a drink?

Where do Gauchos meet for a drink?
?>